If one talks about a chicken breed that exudes elegance in its feathers alone and with an almost-perfect Mohawk, the Andalusian breed takes prime position right there.

An Andalusian chicken has a true origin, a mystery yet to be unveiled but it’s a common belief that this race came into existence as Black Castilians were bred along with other chickens in local areas of Castile, Spain. 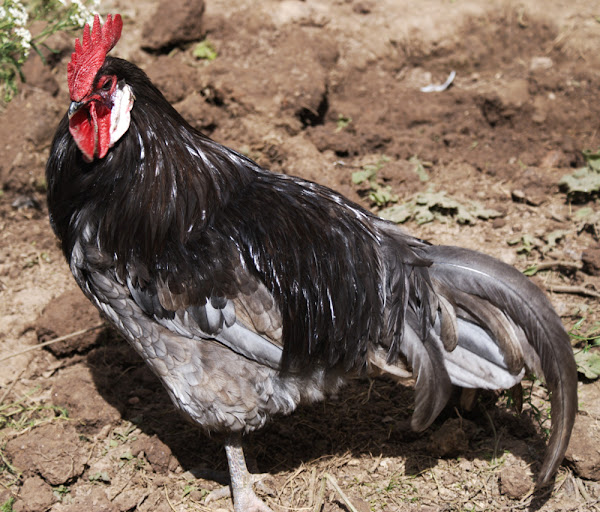 When it comes to origins, the Andalusian breed still has its origins and birth staying undiscovered but by the appearance and some traits, it’s likely related to the Castilian chicken breed.

In addition to that, its resemblance is more to Spanish chicken than any other even though it has white earlobes and lays a healthy number of eggs as commonly found in the Mediterranean breeds.

The English, Leonard Barber was the first who imported Andalusians from 1846 to 1847. However, back then, this breed had a lot paler and a washed-out blue colour to it. What one sees today, an enhanced and improvised version of blue, we can thank the English for their contribution to that.

An Andalusian chicken makes up for a medium-sized mid-range chicken and has quite a distinct appearance if observed with a keen eye. It is a lightweight active bird that sprints around at quite a pace and has a confident and extroverted aura to it.

While this might not be the defining appearance trait of the Andalusians, it has a bright red wattle and comb on the top of its head with variance in hens and roosters both.

For a hen, one might notice the comb flopping to either side a little while the rooster has its comb erect and with 5 points. Their ears are distinctively white and oval and could often be considered as their defining factor for recognition as well.

They are defined as what we can call the true manifestation of ‘unstable blue colour’ since the process of obtaining the perfect blue ones is based on which multilineage.

This breed has 4 toes feet and has an officially acknowledged weight of 5.5 lbs to 7 lbs with 5.5 lbs recognised for a female Andalusian chicken while 7 lbs for a male counterpart.

The premium distinct feature of the Andalusian chicken breed is the blue colour of their plumage. What makes it unique is the possibility of the blue existing in numerous hues which heavily depends on the chicken’s lineage.

Every feather should be either laced with a black or dark blue for it to be an Andalusian chicken.

They tend to be rather mid-sized but have a longer body which makes them look slender. In addition to that, they have clean legs with no feather support and that too in stale blue colour.

In Andalusian chickens, there is a phenomenon involved called diluting gene which is an incomplete dominant gene. This has a strong effect on the colour of the offspring.

Diluting gene entails that if parents or mating chickens do not have a diluting gene, the offspring will have the same colour as of parents or some combination of the two. Following is a table that shows possible combinational results of the mating:

Every time one talks about chicken breeds, the egg factor takes huge importance and when it comes to that, Andalusian chicken is a commendable layer. On average throughout the week, this breed can lay up to 3 eggs every week which is decently large and white.

What makes this breed so unique is that it lays eggs throughout the winter season as well! But call it commitment issues or not, the Andalusians really have no interest in being a mother and don’t prefer sitting on their eggs.

Therefore, one often has to opt for an incubator if reproduction is the key goal.

There’s an interesting fact entailing this breed’s uniqueness. Although the mother isn’t interested in sitting on her eggs, when the chicks are born, they feather out at a very rapid pace. Putting a cherry on the top, prepare yourself for cockerels crowing by the start of the 7th week!

Andalusian chickens are like balls of sunshine as they sprint around actively in the place. They have a high tolerance level toward warm and even hotter climates.

However, they aren’t too cold-friendly and would often need to be given a warm temperature as well. If you live in a cold place, you might want to put your heater on too.

At observation, the Andalusians are generally curious and friendly as well as looking for treats from humans. While they have a very welcoming aura to them, they don’t like being picked and that’s where one should draw the line as well. A ball of sunshine if too intense can burn you too!

This breed loves strolling outside the pen and prefers environments that don’t restrict its outgoing nature. Thus, if one is confident then let it be its adventurous self, an Andalusian chicken starts to get very nervous, and noisy and starts feather picking.

See also  can chicken eat garlic? Here's Everything You Need to Know

Because of their white egg production and lack of broodiness, Andalusian hens make excellent layer hens. White skin, clean shanks and toes, and long, deep bodies distinguish the genderless species. Leghorns and Minorcas are the closest in size in terms of size comparisons.

Rare, soft feathers and little weight classify it as a feather. As of 1874, it is classed as a Mediterranean breed by the American Poultry Association.

They are excellent foragers and much prefer to be left to their own devices. Chickens from the Andalusian region of Spain are extremely robust and can thrive at any temperature. They are able to withstand freezing temperatures.

How many eggs do Andalusian chickens lay?

Andalusian chickens are excellent egg producers. These birds lay approximately 150 and 165 eggs per year, or three each week. Medium to huge in size, the eggs are a bright white colour.

Andalusian chicken is a rare type of breed and its state is said to be threatened. It grows rapidly and is easy to produce and maintain for the long term.

The American Poultry Association acknowledged the Andalusian chicken as an authentic and standardised breed in 1874 and since then, there have been numerous improvisations to its colour combination.

The blue we see today on Andalusians is the clear appreciative sign of what the Englishman did to make its blue colour what it is now.

Its active, non-docile, and friendly nature make it the perfect pet to breed at home and get perfect white eggs from!